I’ve spent the last two nights cruising the nile as part of my tour of Egypt.  It feels very surreal, I feel like an explorer in an Indiana Jones movie.

I sailed by Felucca, which is a traditional Egyptian sailboat, that have plied the mighty Nile since ancient times. Being a wind-powered craft with no motor, we didn’t (or couldn’t) stick to a strict itinerary and stopped off regularly for swims or to see local villages along the river banks. Perhaps the most amazing part of the trip has been sleeping under the stars out on the River Nile.

Interesting Facts about the Nile river:

One of the stops we made along the Nile was at the magnificent Temple of Karnak. More than a temple, Karnak is a gigantic and stunning complex of sanctuaries and pylons dedicated to the Theban gods. 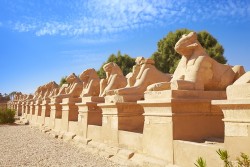 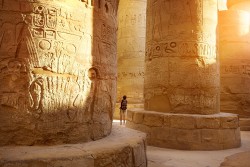 Another stop was at the Temple of Kom Ombo. A unique riverside temple, it is unusual in that everything architecturally is doubled and perfectly symmetrical along the main axis of the temple including twin halls, courts, colonnades, sanctuaries and entrances.