I booked this trip to Egypt last minute and although I’ve travelled a lot by myself in the past I felt that it was best to book on a tour for this destination.

I booked via ‘On the Go’ Tours and it was a great trip (would recommend).  Our tour was a young group, 20-30 year olds who were all very low-key yet friendly.

Upon arrival in Cairo the tour guide met me in customs and whisked myself and a few other members of our tour through without hassle.  The evening was spent in the hotel restaurant / bar while we all got aquinted.  Our first day in Cairo would be spent visiting  the Pyramids of Giza, obviously one of the highlights of the trip.

We explored the Giza plateau, had an option to ride camels, saw the impressive pyramids and massive Sphinx.  Interestingly, our guide told us if we tried to build an exact replica of this pyramid it would not be possible. We do not have the precise technology that the ancient Egyptians had that was necessary to build this pyramid.

The oldest of the seven wonders of the world, The Great Pyramid was built with about 2.3 million stone blocks and it is thought to weigh 5.9 million tonnes.

In the afternoon, we toured Saqqara – an ancient necropolis with many half-buried tombs and the famous Zhoser’s step pyramid.

We start with the dazzling antiquities at the Egyptian Museum. Amongst the many exhibits are the treasures of King Tutankhamen. It was actually a really great Museum and offered great info for someone like me who knew very little about Egyptian history. In the afternoon we went on a short city tour visiting old Cairo and the Islamic citadel and markets.

We took an overnight train to Luxor.  The journey was ok, it was difficult to sleep so I was pretty tired throughout our day of touring Valley of the Kings. (Image above: suronin / Shutterstock.com)

The valley of the Kings; Once part of the ancient city of Thebes is the burial site of almost all of Egypt’s Pharaohs from the 18th, 19th and 20th dynasties.

The massive pair of statues known as the Colossi of Memnon are the first monuments I got to see in Luxor during our morning visit to the West Bank – home to the legendary Valley of the Kings. We saw the colonnaded Temple of Queen Hatshepsut before heading to our hotel to check-in.  Spent the afternoon relaxing and napping, then got ready to go to the Temple of Luxor.

Luxor Temple looks stunning at dusk and was beautifully illuminated with lights as the sun went down.

In Luxor, we boarded our felucca for a 2-day cruise on the Nile.  Read about it here:  Cruising the Nile

The day-trip we took to Abu Simbel was probably my highlight in Egypt.  I am a little ashamed to say I’d never heard of it before arriving in Egypt and although the mystery surrounding Giza is incredible I would definitely say Abu Simbel is one of the best historic sights I have ever visited. 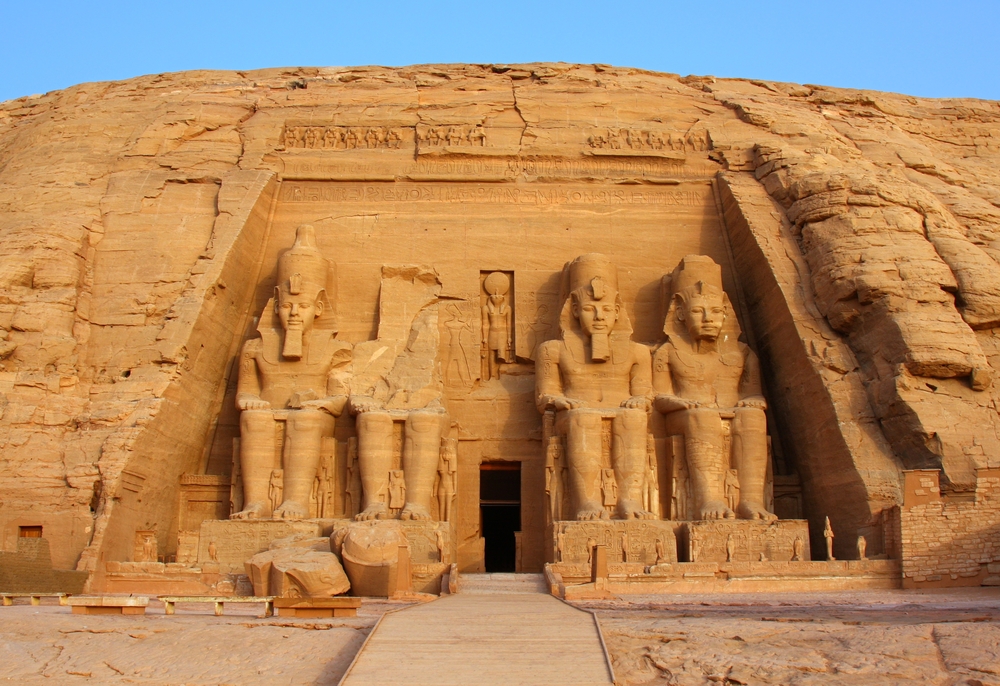 In 1257 BC, Pharaoh Ramses II had two temples charged out of solid rock at a site on the west bank for the Nile south of Aswan, now known as Abu Simbel.   The location of the temples is so remote near the Sudanese border that the temples were unknown about until the rediscovery in 1831.
Ramses’ temple was cut into the face of a cliff.  The rock-cut facade of the temple is 119ft wide and 100 ft tall and represents the front of a pylon in front of which are 4 colossal seated figures of Ramses.  It is an unbelievable sight to look at.  Above the cornice, is a row of baboons, who, as watchers of the Dawn, are shown with their hands raised in adoration of the rising sun. Egyptians believe baboons played a role in helping the sun god Ra defeat the darkness of night and so were believed sacred to the worship of the rising sun.

The actual interior of the temple is inside the cliff in the form of a man-made cave cut out of the living rock. It consists of a series of halls and rooms extending back a total of 185 feet from the entrance. The long first hall is 54 feet wide and 58 feet deep and has two rows of Osirid statues of Ramses each 30 feet high. Those on the north side are shown wearing the White Crown of Upper Egypt, while those on the south were wearing the Double Crown of Lower Egypt. At the west end of the main hall are three doors, the side ones leading into lateral chambers, and the central one opening into a room with four square pillars. From this room, a doorway leads to the vestibule, and beyond that is located the innermost shrine with seated statues of the gods Ptah, Amun-Ra, the deified Ramses II, and Re-Horakhte.

The Pyramids of Giza