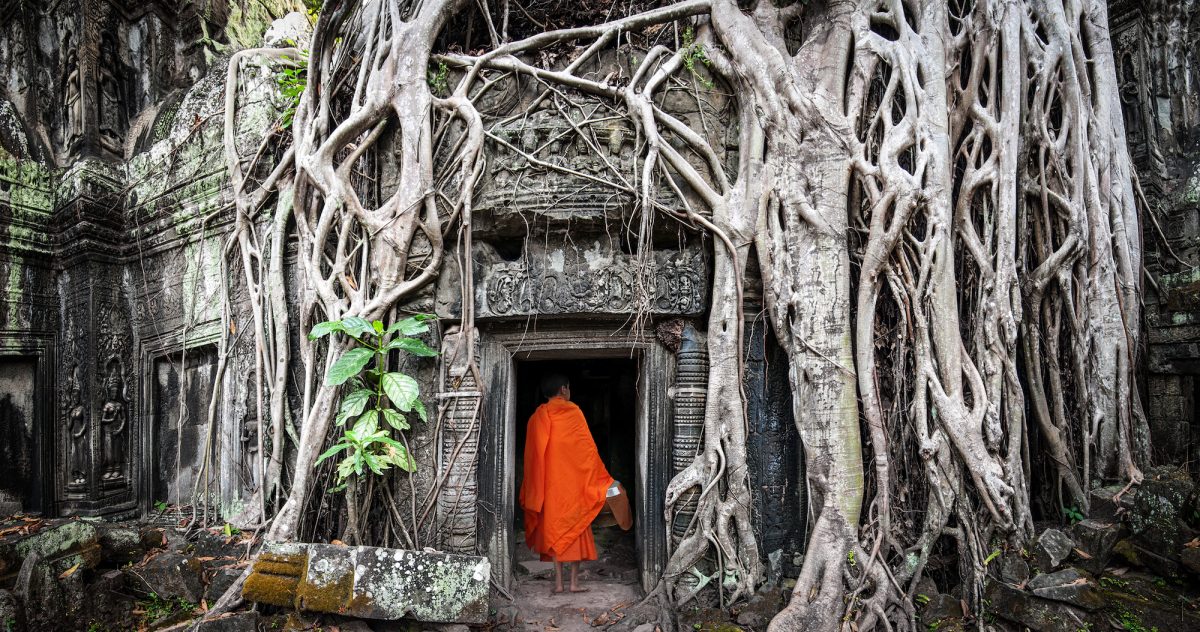 Located in the Siem Reap province of Cambodia, this UNESCO World Heritage site was once the centre of the Khmer empire that ruled Southeast Asia before the civilisation went extinct. The city was then reclaimed by the jungle and found by western explorers in the 1800’s, and after extensive restoration in the 20th century Angkor Wat opened for tourists from around the world to explore.

We were recommended our Tuk-Tuk driver/guide, Chanti, from our ex-pat friend living in Cambodia.  We arranged for Chanti to pick us up from our accommodation, The Baby Elephant Boutique hotel, at 4.30am so that we could get to Angkor Wat for sunrise.  Tickets for Angkor must be purchased from the ticket office, most people who only do 1-day will pick tickets up the night before (they last 24-hours) but our guide managed to find a short que at 4.45am which meant we arrived at the temple by 5.05am (I think we got very lucky and would recommend picking tickets up the night before if you want to guarantee you are able to see sunrise at Angkor Wat).

The temples of Angkor Wat are the perfect fusion of creative ambition and spiritual devotion. The Cambodian ‘god-kings’ of old each strove to better their ancestors in size, scale and symmetry, culminating in the world’s largest religious building. 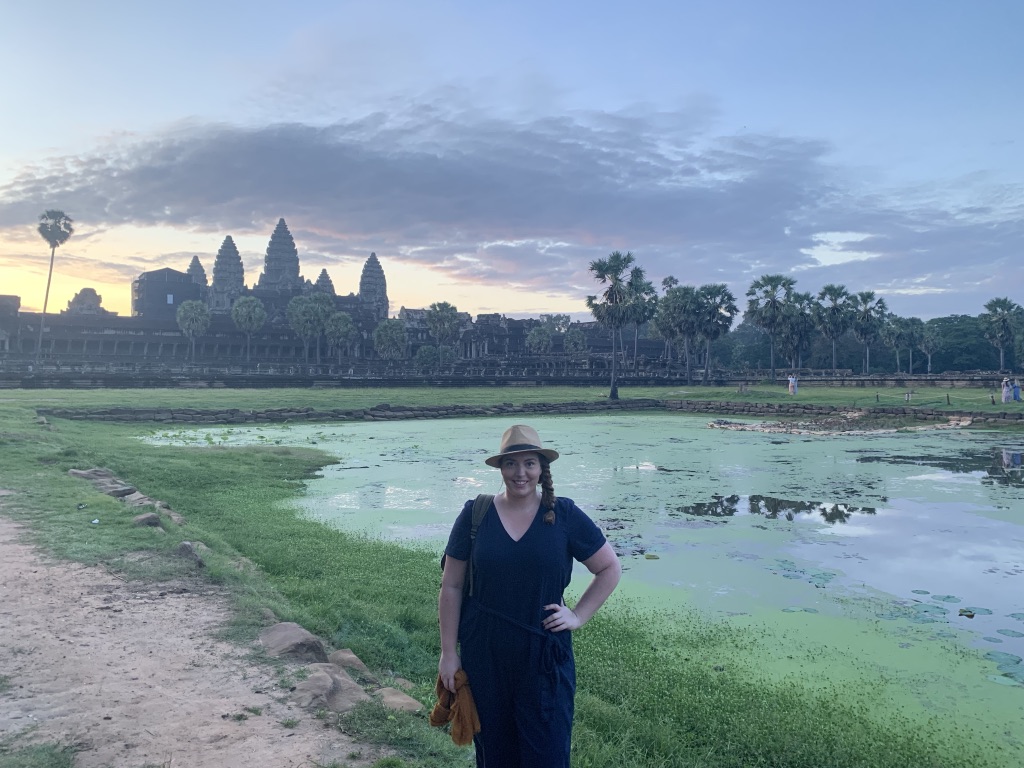 We arrived just before 5am and waited patiently in the most ‘still’ heat.  I was absolutely dripping by the time the sun came up, which surprisingly bought a light breeze with it.  It is rainy season here in Cambodia so there were not as many tourists as I had expected.

The temple is the heart and soul of Cambodia: it is the national symbol, the epicentre of Khmer civilisation and a source of fierce national pride. Soaring skyward and surrounded by a moat that would make its European castle counterparts blush, Angkor Wat was never abandoned to the elements and has been in virtually continuous use since it was built. 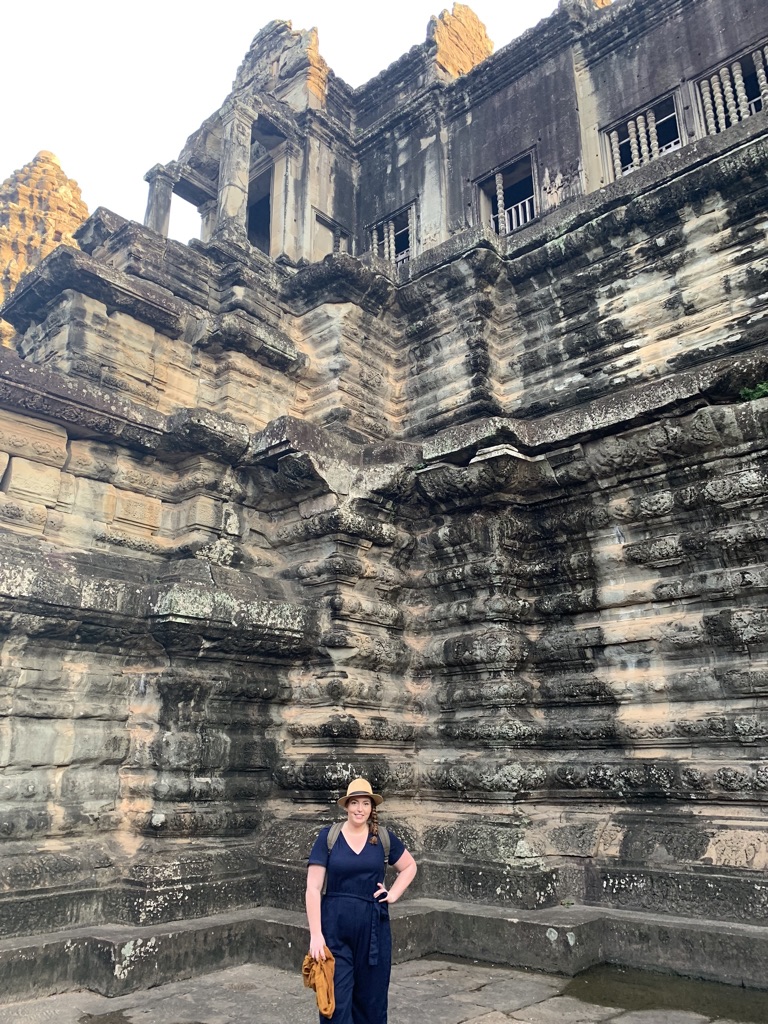 There is much about Angkor Wat that is unique among the temples of Angkor. The most significant fact is that the temple is oriented towards the west. Symbolically, west is the direction of death, which once led a large number of scholars to conclude that Angkor Wat must have existed primarily as a tomb. This idea was supported by the fact that the magnificent bas-reliefs of the temple were designed to be viewed in an anticlockwise direction, a practice that has precedents in ancient Hindu funerary rites. Vishnu, however, is also frequently associated with the west, and it is now commonly accepted that Angkor Wat most likely served both as a temple and as a mausoleum for Suryavarman II.

Allow at least two hours for a visit to Angkor Wat and plan a half-day if you want to decipher the bas-reliefs with a tour guide and ascend to Bakan, the upper level.

Ta Prohm is the modern name of the temple at Angkor, built in the Bayon style largely in the late 12th and early 13th centuries and originally called Rajavihara. Most people know it as the location in which Tomb Raider was filmed. What makes it unique and incredibly interesting to visit is the fact that nature has taken over it, with trees that have grown inside and on top of the various buildings.

A combination of towers, closed courtyards and narrow corridors. Many of the corridors are impassable, clogged with jumbled piles of delicately carved stone blocks dislodged by the roots of long-decayed trees. Bas-reliefs on bulging walls are carpeted with lichen, moss and creeping plants, and shrubs sprout from the roofs of monumental porches. Trees, hundreds of years old, tower overhead, their leaves filtering the sunlight and casting a greenish pall over the whole scene.

The most popular of the many strangulating root formations is the one on the inside of the easternmost gopura (entrance pavilion) of the central enclosure, nicknamed the Crocodile Tree. 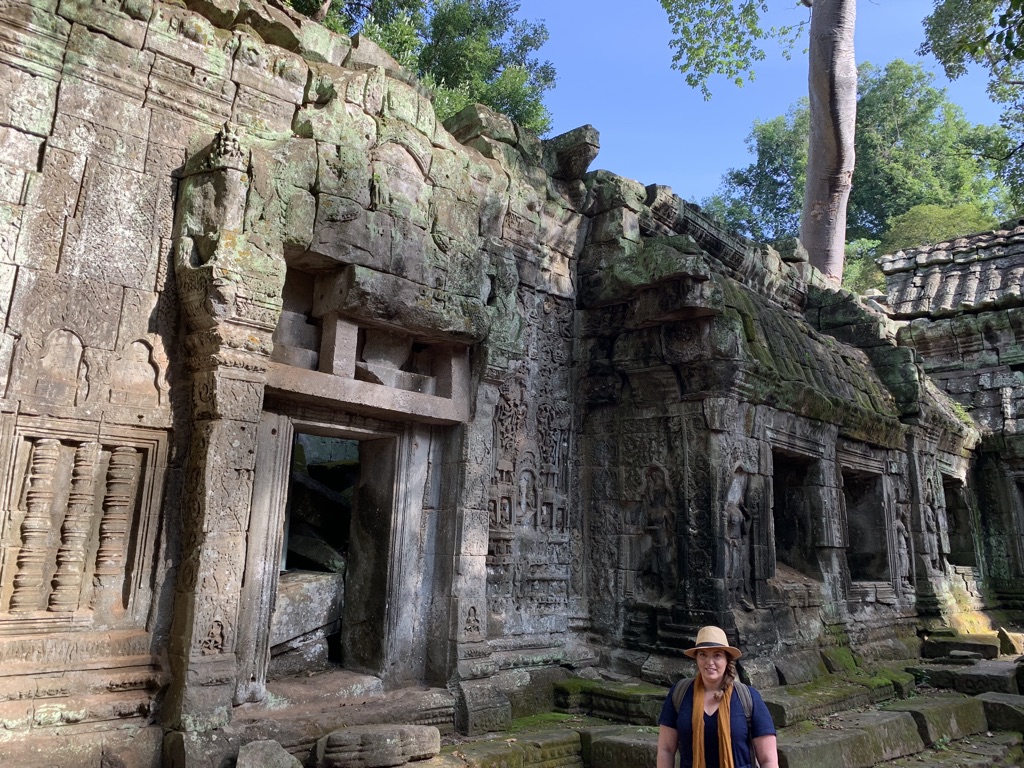 Ta Prohm is one of the most interesting temples to visit in Siem Reap.  The construction of the temple was started in 1186 AD. The site was subsequently abandoned in the 15th century, after the fall of the Khmer Empire, and it was neglected for centuries – hence why nature took over it. Our guide, Chanti bought us here as the second stop which was awesome, because there were very few people here.  Apparently, there is a route that most guides go, and Chanti said after Ankgor Wat he likes to do the loop the opposite way because it means his group get to see a few temples without the mass crowds. 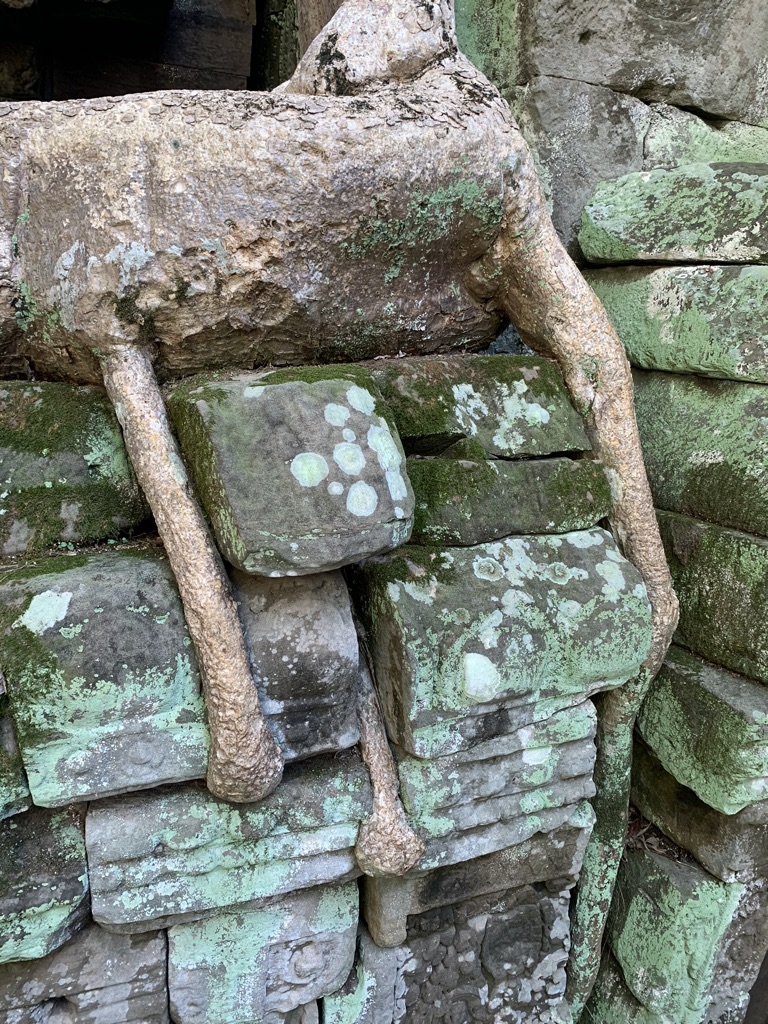 This was easily my favourite temple. Ta Prohm is cloaked in dappled shadow, its crumbling towers and walls locked in the slow muscular embrace of vast root systems. Undoubtedly the most atmospheric ruin at Angkor – It is just stunning. It’s like it has been swallowed by the jungle, and looks very much the way most of the monuments of Angkor appeared when European explorers first stumbled upon them. 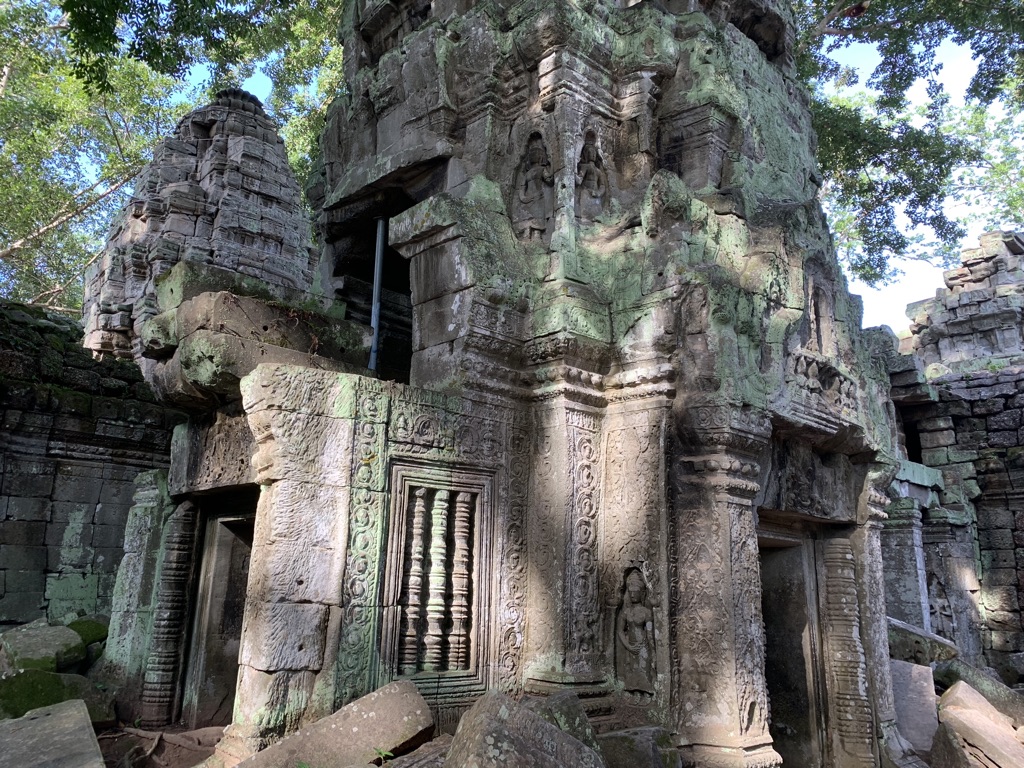 Ta Prohm was a Buddhist temple dedicated to the mother of Jayavarman VII. It is one of the few temples in the Angkor region where an inscription provides information about the temple’s dependents and inhabitants.

Banteay Kdei, a massive Buddhist monastery from the latter part of the 12th century, is surrounded by four concentric walls. 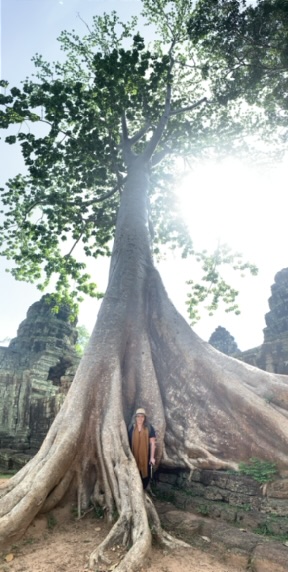 Each of its four entrances is decorated with garudas, which hold aloft one of Jayavarman VII’s favourite themes: the four faces of Avalokiteshvara. East of Banteay Kdei is a vast pool of water, Sra Srang, measuring 800m by 400m, reserved as a bathing pool for the king and his consorts.

The layout of the temple is three enclosures within an outer compound wall. The inner enclosure is lined with galleries that run along its axis and lead to the main temple. Unfortunately, it was built with a poor grade of sandstone and construction methods were inferior compared to other Angkor temples. The very deteriorated condition today is evidence of that. However, ongoing renovation is being conducted in order to restore much of the original condition of the temple.

An interesting part of its style is that its gates are adorned with the same face towers, also called gopuras, as Angkor Thom‘s 5 gates. The most agreed upon theory among historians is that the face towers as Jayavarman VII’s signature, and represent both himself and the god Lokesvara.

An interesting similarity between Banteay Kdei and Ta Prohm is the hall of dancers located just before the entry way on the temple’s east side. It is decorated with apsara dancer bas-reliefs and a seated Buddha that watches over the corridor.

But, check out this tree, I couldn’t get over how impressive the trees threading through the ruins were.

The temple consists of a pyramid-shaped temple-mountain with the uppermost of the three tiers carrying five lotus towers. Pre Rup means ‘Turning the Body’ and refers to a traditional method of cremation in which a corpse’s outline is traced in the cinders: this suggests that the temple may have served as an early royal crematorium. 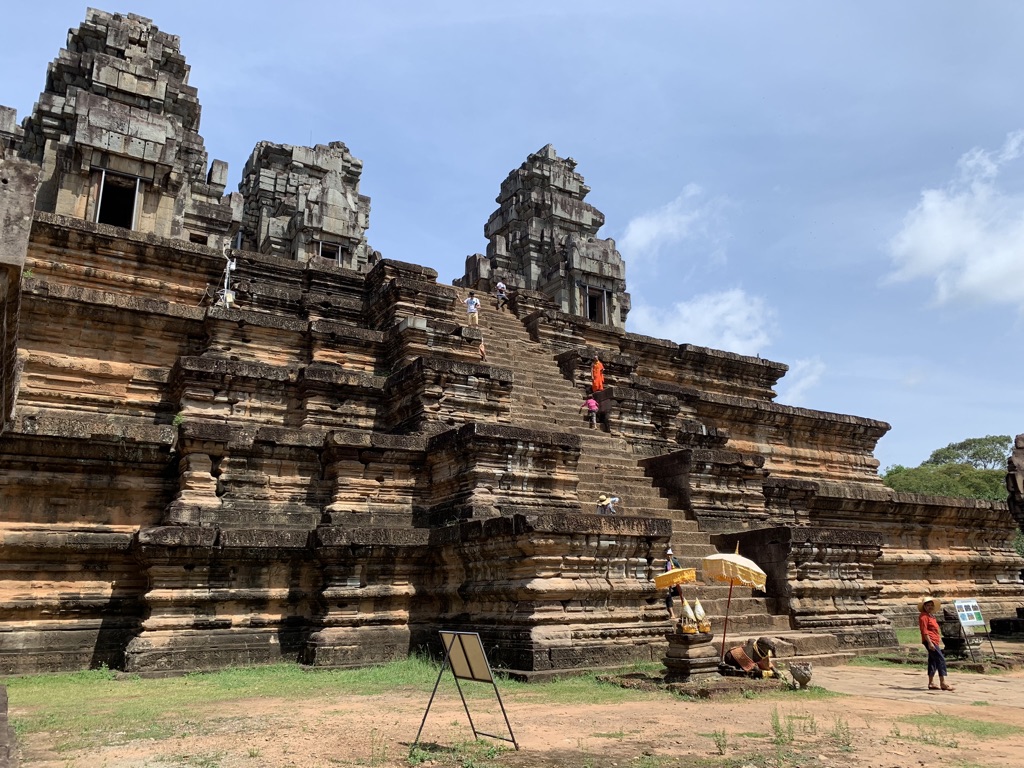 At the heart of Angkor Thom is the 12th-century Bayon, the mesmerising, if slightly mind-bending, state temple of Jayavarman VII. This is my 2nd favourite temple at Angkor. Its 54 Gothic towers are decorated with 216 gargantuan smiling faces of Avalokiteshvara, and it is adorned with 1.2km of extraordinary bas-reliefs

When it comes to the many faces, there is some debate over who they actually represent. Some scholars suggest that they are of King Jayavarman VII while other theories that they are the face of a Bodhisattva (Buddhism’s compassionate and enlightened being) or a combination of Buddha and Jayavarman.

There are also many complicated and exquisite bas-reliefs around the temple, with scenes depicting land and naval warfare, market scenes, childbirth, and others depicting the construction of the temple itself. 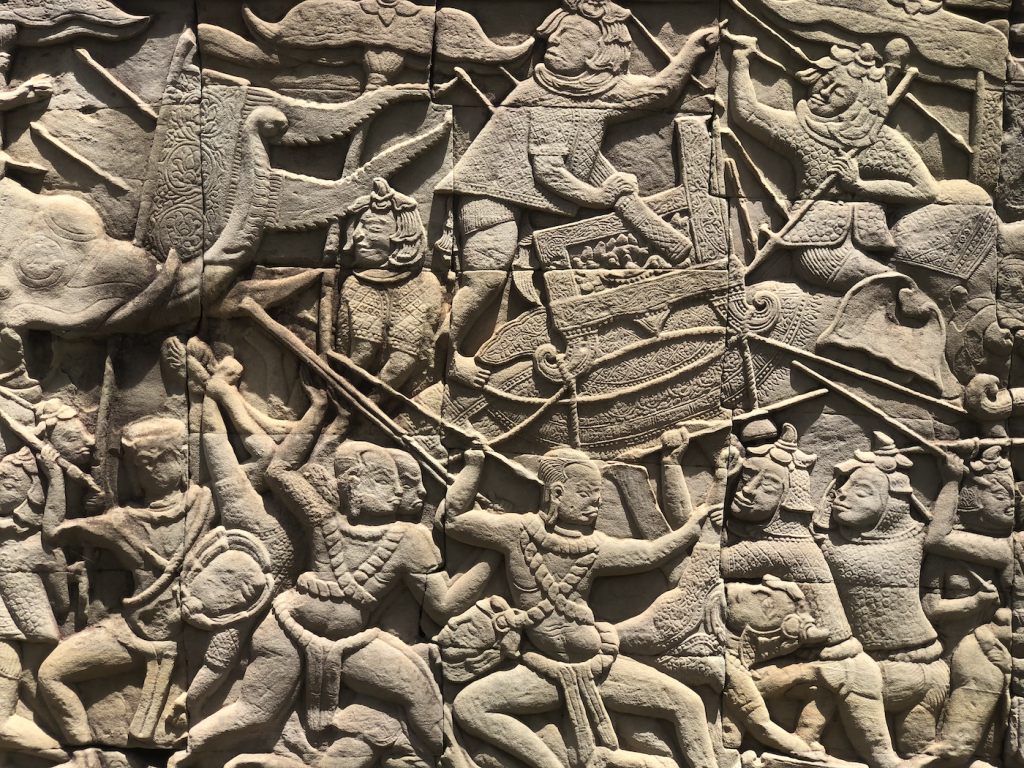 I was beginning to fade at this point as the temperature hit 37 degrees.  I had been sick with a stomach virus for the 5 days leading up to our Angkor Wat visit so hadn’t been consuming much to eat.  I’d recommend travelling with lots of water and some rehydration supplements too as even if you are feeling good and healthy the heat really does take its toll.  We decided to drive through South Gate and do one more small temple before calling it a day.

In front of the South Gate there is the best-preserved and restored stone causeway across the 100 m broad moat of Angkor Thom. The railings are formed by the world-famous rows of giant sculptures holding on their knees a Naga, whose seven heads rises fanwise at the outer end of the causeway. Originally, each of the Angkor Thom’s five city gates had such balustrades with two times 54 figures, 108 being a holy number in Mahayana Buddhism. But today only the South Gate has an almost complete set. 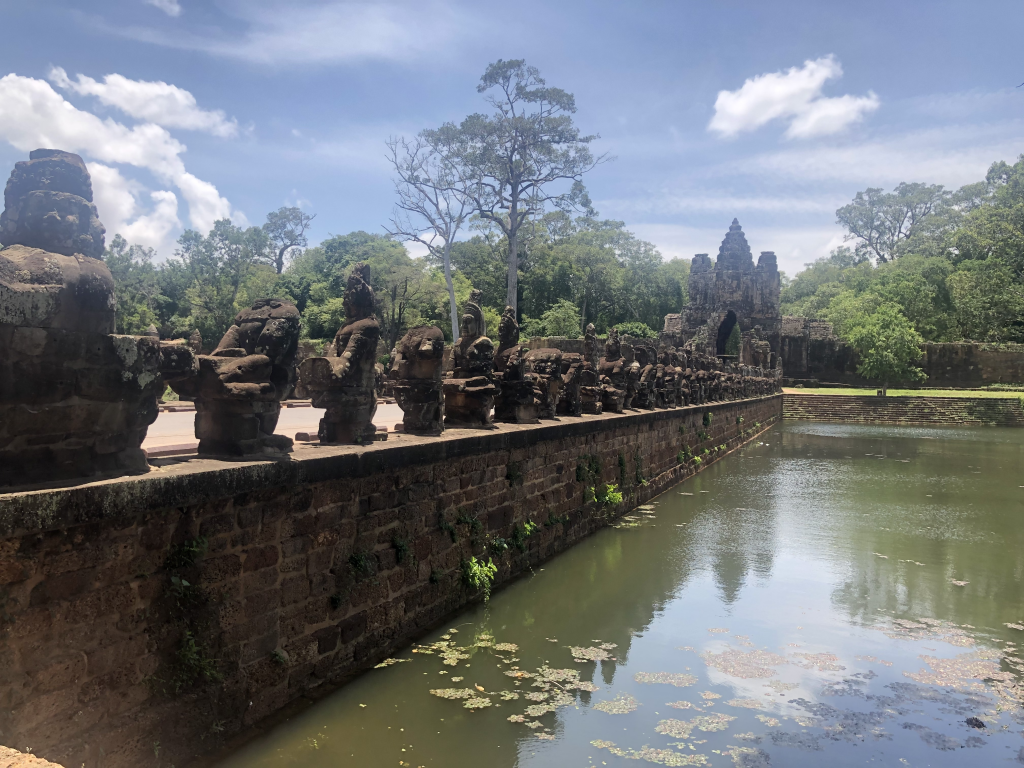 The eastern railing is the row of 54 Ashura demons, they can be easily identified because of the grimacing expressions of their faces. Some of the original heads are sheltered in museums now, being replaced by cement copies of a much brighter colour. The other row of 54 more friendly looking Devas (gods) is less well preserved, and more heads are missing. As already mentioned, the sculptures in each of both rows are connected by a rope in their hands in the form of a serpent. The most common and convincing interpretation, though not undisputed, is that this is a three-dimensional version of the famous “Churning of the Milk Ocean”, which is depicted on many bas-reliefs in Angkor, for example, in majestic size and perfect workmanship, at the western outer gallery of the Angkor Wat.

Our guide Chanti – he is amazing.  If you’re visiting Angkor Wat and want his details, please do send me a message and I’ll be happy to refer him. 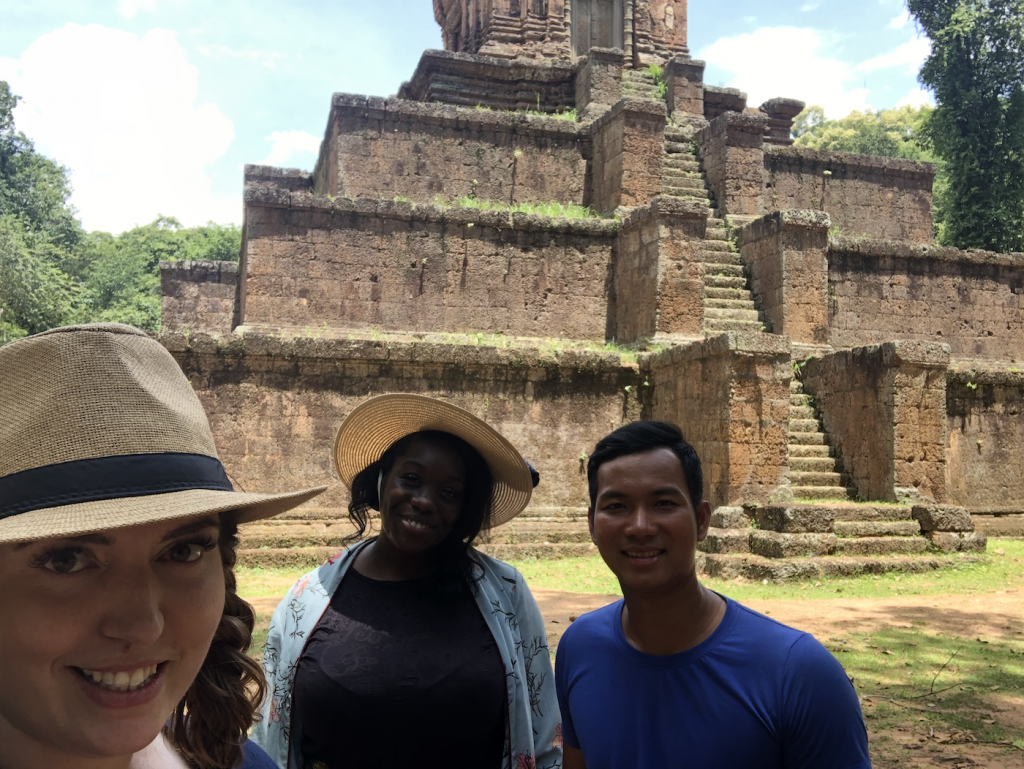 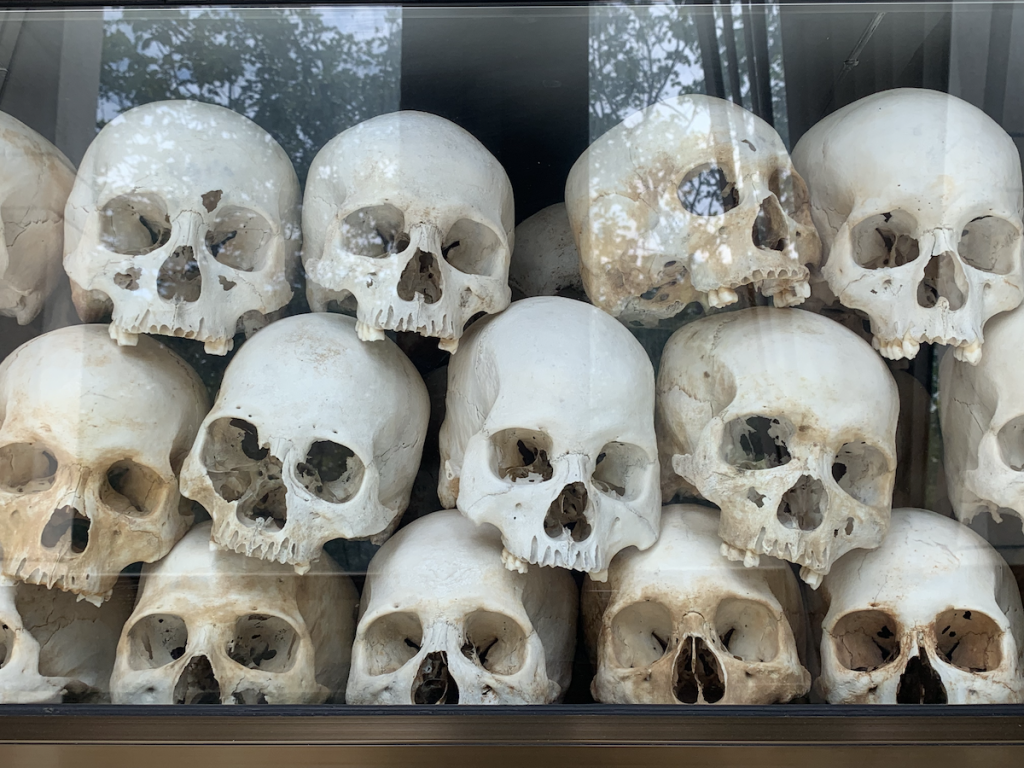 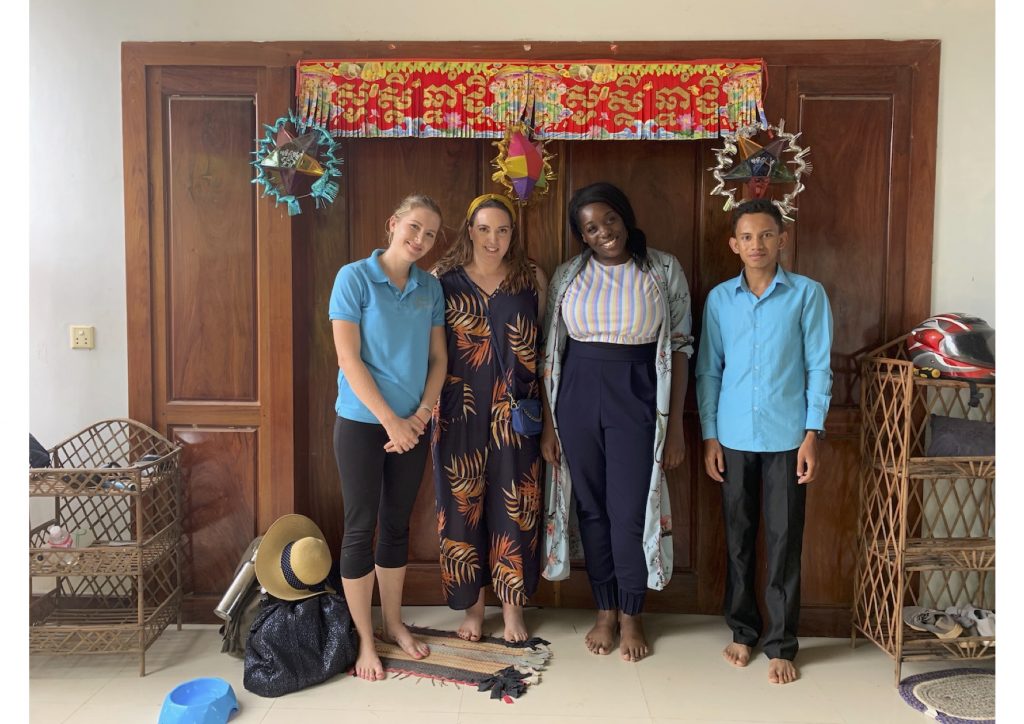